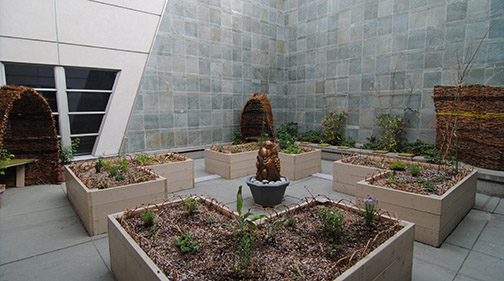 The second in our series of commissioned artist’s gardens, created spring 2014 in our outdoor courtyard space by Kelowna-based artist Lynden Beesley. She pays a tribute to the medieval herb/physic garden, using raised beds arranged symmetrically around the centre of the space.

Beesley received her BFA in printmaking from Queen’s University in Kingston, Ontario in 2001. That same year she relocated to Kelowna to pursue her art. Beesley has been active as an artist in the region, exhibiting her prints and sculptures regularly in solo and group exhibitions.

A PDF with more installation images, interview and selected biographies is available to view. [<<<Click Here]

An interview between Liz Wylie, Curator, Kelowna Art Gallery, and the artist, Lynden Beesley, discussing the commission. Interview was conducted in the spring of 2014.

Do you think that gardening could be considered as an art form?

Is the world round? Yes, I consider a garden to be an art form. I see a gardener as a sculptor and the garden as a living sculpture. Not only do the shapes and forms of plants and objects in the garden come into play, but also the panoply of colour, texture and light. The fabric of the garden is a collage of all of these elements, and more. I think that when a garden is planned and executed well it creates a harmonious feeling, not only for the gardener but also for others who spend time in it. Remember, the garden was Monet’s creation and his muse.

In what ways do you see approaches to and styles of gardening as having corresponded to the changing ideas in worldview and toward the landscape and nature throughout history?

I find it fascinating how gardens evolved along with all other cultural productions – literature, music, art, dance – for example, as human attitudes toward life, religion and culture continued to change. In Western Europe – let’s focus there – the medieval walled garden preserved life and limb as much as the monastery libraries kept learning alive. It was a tumultuous and chaotic time period. A garden in a cloister doubled as a space for prayer and meditation. Usually gardens were in in the shape of a cross, with a fountain or a stone sculpture in the centre. I have emulated this in my installation for this project.

Medical knowledge was linked to the plants cultivated in the medieval garden. Monks had Herbals, which were manuscripts that contained traditional medical and herbal knowledge. This knowledge had been passed down from the Materia Medica of Dioscorides, traced back to 40 AD, and the Naturalis Historia of Pliny, from AD 23, among other works. The classifications in these books led to the concept of the botanical garden, centuries later.

In Renaissance and Baroque Europe as the upper classes proliferated so did the enclosed gardens at palaces and country estates. These gardens provided a respite and retreat from the bustle of courtly life, and they were of a pleasurable, less utilitarian nature. We might recall that Giovanni Boccaccio’s Decameron (written in the early fourteenth century as a collection of amorous stories) was set in a hortus conclusus (walled garden).

Various political and philosophical developments fed into the development of botanical gardens in Europe, which were classified scientifically, and contained specimens from all over the world. Next came the formal garden style, in which France was the leader, producing incredible parterre designs. Topiary was developed into a fine art, and hedges made into allees abounded. Gardens were used as conveyors of power and indicators of wealth.

By the end of the seventeenth century in Europe medical knowledge had replaced the medieval herbals. With the onset of the Romantic movement in art, literature, and music, gardens became unleashed from their elegant formal structures and the so-called English style, or English landscape garden approach took continental Europe by storm. The premise was to use the natural features of the land and then to manipulate things in such a way as to enhance the natural beauty. Palladian-esque artifacts and follies were inserted into the park-like settings. Winding woodland paths and leafy glades were planned and then planted to look completely natural. This was intended to create an ideal Arcadian landscape such as had been painted by Claude Lorrain (thus the invention of the expression picturesque).

What was most interesting or appealing to you about re-creating a medieval garden for your commission at the Kelowna Art Gallery?

The internal courtyard at the Kelowna Art Gallery has always reminded me of a cloister. The most appealing aspect of creating a medieval-style garden in the courtyard will be to see how people interact with the garden I create. I wonder, for example, if there will be  a spiritual or contemplative feeling to it.

What gardens have you visited on your travels, anything or aspects that were particularly inspiring?

Because of my family’s interest in gardens and gardening I have visited botanical and great gardens while on my travels, including many of the National Trust Gardens in England, and gardens in various parts of Canada. My favourites in BC are the Van Dusen Gardens in Vancouver, especially when the azaleas, rhododendrons and cherry trees are blooming. I also love the canopy walk at the UBC Botanical gardens. In England, the camellias at Lanhydrock House in Cornwall, and the fern tree forest on Tresco in the Isles of Scilly will always be special. The Eden project at St Austell in Cornwall is also a wonderful place to visit.

How would you describe your own experience with gardening? How would you characterize your preferred/natural approach and style? Is it similar in any way(s) to how you approach your art?

My own experience with gardening started as a small child. My mother was a keen gardener and flower arranger. I spent many hours in the garden weeding, which has held me in good stead. I know what is a weed!! Wherever I have lived I have created a garden. I like to use the natural lie of the land but I certainly have my preferences as to the plants I will choose. I have found gardening in Canada quite challenging due to the very different climatic zones. I prefer a garden to have its wild parts as well as its orderly areas. I like curved edges for lawns and flowerbeds but I favour angular raised beds for vegetables.

As I have been working planning and creating this garden, I realize that in many ways my Hortus Conclusus mirrors my work as a printmaker and sculptor. Whether I am using a scribe, a chisel, or a shovel, I have to physically alter the surface topography of the medium I use. My imagined gardens in my prints range from the biblical, to the medieval, and to the natural landscape. My sculptures are inspired by mythology and by nature around me. The difference between my gardens and my art is that my garden will never be finished. Ultimately a garden will have a natural, free-flowing life far beyond that of any of my prints or sculptures. 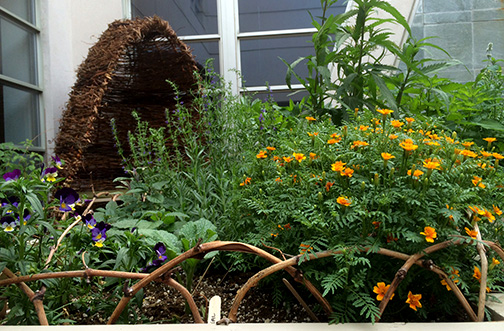 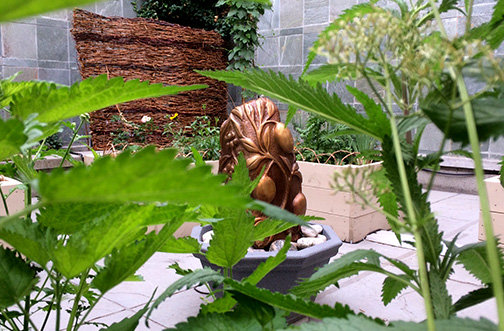 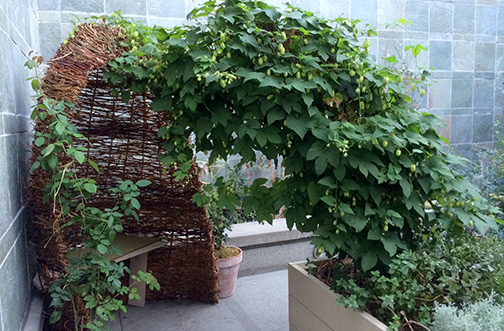