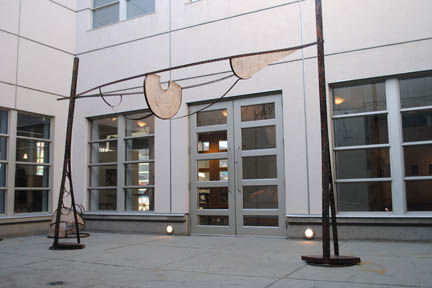 Kelowna-based artist Lori Mairs chose to work with her tried and true hallmark materials and methods to create a dysfunctional chair that has been deconstructed. So rather than experiencing the very chairness of a single chair-like creation, the viewer is compelled to explore the entire space of the courtyard, engaging with the multiple elements that Mairs has fabricated. As one looks about, there are objects that might look something like chair-ish forms or elements, but at the same time, their arrangement seems random and organic, as though the elements are tossed vestiges from some age-old ritual, left behind in situ. To confound matters, Mairs will be assisted by teams at several instances during the run of the installation of Ellipses to shift around and alter the positions of the works, creating a new dynamic and reading each time.

Mairs discovered one-eighth-inch-thick, long strips of steel flatbar as a material when she used it to strengthen and stabilize some wood in a sculpture in 2005. She drills holes along its length in the centre into which she inserts bolts to build the shapes she wishes to form. She uses Japanese mulberry paper (commonly known/sold as rice paper) to span the spaces created by the steel-bar-drawing in-space, that she coats with real beeswax (gathered from hives, often with bits of bee wings or foliage left stuck in). This makes the works waterproof and gives the paper a beautiful golden colour and a slightly shiny surface, along with a subtle aroma. Mairs’ use of mulberry paper with beeswax also dates from 2005. Taken together these materials marry well to produce organic forms in large scale than can sit out in all weather.

Her title for the dysfunctional chair commission, Ellipses, is tricky to figure out. Does it make reference to the idea of orbits? So that we circle the work, engaged in meaning making, each in our own way, from our own place of approach? Or does it link to the word elliptical, meaning a rather roundabout reference, rather than a direct one? This would also make sense. Actually, what the artist had in mind is the meaning of the word ellipses used in grammar/typesetting, in which the gaps left in written thought are expressed by a space, three periods and a space, making reference to omitted material or ideas. So the title makes reference to a gap, or to information that is forthcoming.

Mairs did not attend art school until her late thirties, when she enrolled at Okanagan University College in Kelowna. She says that she had always drawn and made art, and she also has parallel ongoing practices in sculpture, using found bones and in jewelry-making, using found antlers as her main materials. She brings a varied lived experience to her work, with its several levels of meaning and subtleties and richness of reference. Some of the artistic influences she readily acknowledges are the monumental sculptures of American artist Petah Coyne, who also uses wax and other materials like stuffed birds, and the work of San Francisco-based sculptor Ruth Asawa, who works in large scale with bent wire. Certainly the notion of body-sized works seems important to Mairs, as are her work’s references to natural forms and archetypes (such as the boat). Although she works with an industrial material – steel flatbar – there is nothing heavy handed about her work. The shapes and forms seem light and airy, like seed pods or gigantic maple keys, and her references are merely suggestions, nothing too ponderous or self-conscious. Despite the seriousness of her intentions and ambitions, there is a lovely light-hearted quality to the work she produces: it is as if it is saying to us: life is wonderful, life is short: enjoy yourself.

For our Dysfunctional Chairs series, The Kelowna Art Gallery acknowledges the support of the Vancouver Foundation. 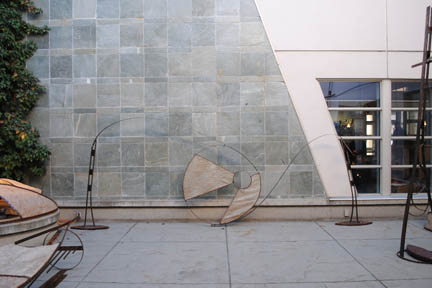