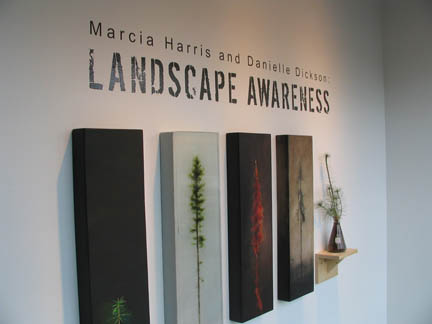 Have you noticed the changing landscape in B.C. and northwestern Alberta?  Artists Marcia Harris and Danielle Helen Ray Dickson have taken notice and have collaborated in response in Landscape Awareness.

Triggered by their emotional response to the loss of our forests from the Mountain Pine Beetle infestation, Harris and Dickson have met with forestry officials and worked in the field.  As part of their research, Marcia and Danielle took notice that the Mountain Pine Beetle has flourished as a result, and now have destroyed more forests than ever.  In response, these two artists are exploring how changing environmental conditions have altered the visual and economic composition of the forested landscape.

The artists’ choice of medium in Landscape Awareness has been carefully considered for the exhibition.  In her paintings, Harris uses layered resin, creating an organic, blurred effect that echoes the resin or sap that leaks from beetle-infected trees trying to defend themselves from immanent death.  As Harris points out, “In the course of nature’s destruction, a startling beauty is unveiled.”

Dickson’s multi-media work and courtyard sculpture challenge the viewer to consider the relationship between an environmental and economic crisis.  As Dickson says, she tries to “bring the viewer into environmental spaces and situations.”  The effect is startling, yet provokes an environmental awareness at its core.  Dickson’s three-dimensional work continues in the Rotary Courtyard until January 20, 2008.

Marcia Harris is a Calgary-based artist who received her B.F.A. in 2004 from the University of British Columbia-Okanagan.   Marcia is currently working on an artist residency at the Banff Centre, dealing with the Mountain Pine Beetle infestation.  Harris is represented by three commercial galleries across Western Canada.

Danielle Helen Ray Dickson is a native of Yellowknife, NT, who currently resides in Kelowna, BC.  Dickson holds a B.F.A. from Okanagan University College and has exhibited her work in British Columbia, Quebec, and at the 3rd International Restcycling Art Festival in Berlin, Germany.

Danielle Helen Ray Dickson would like to thank Michael Carlson Scott, Helmut Speir, Baz and Pat Bradley and Silas David for all their hard work.

Both Marcia and Danielle are grateful for the ongoing support from their family and friends.