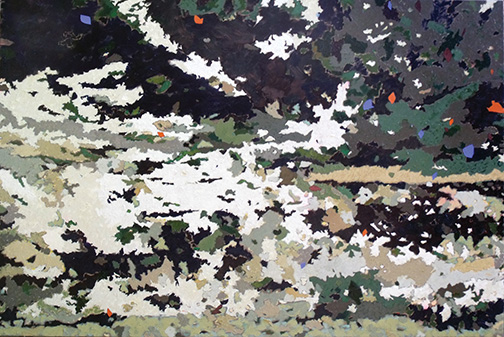 This solo show continues the Kelowna Art Gallery’s ongoing look at the practice of painting in the hands of some of Canada’s leading contemporary artists. Pete Smith is an emerging Ontario-based artist who works in abstract painting. He derives his compositions from a computer animation sequence he created, made up from his own sketches and earlier paintings. Once he selects a still to use as the basis for a new work, he transforms the original as he proceeds on canvas, using oil paint. Smith’s works are abstract and colourful, and read like explorations of the tropes of expressiveness in painting. The artist has created seven new paintings specifically for this show, as well as a new artist’s book.

Smith lives in Bowmanville, Ontario. He has an MFA from the University of Guelph (2007), and is a studio instructor at OCAD University in Toronto. As well as his art practice, he also has done curatorial projects and publishes critical reviews.