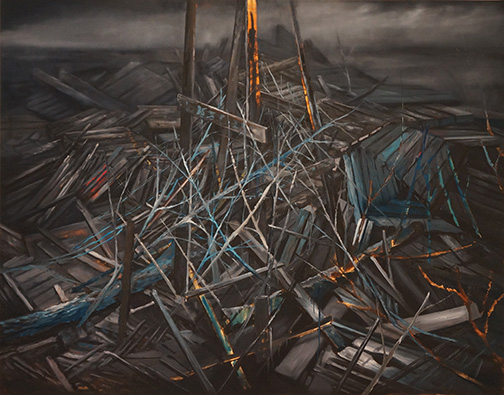 The title of Victoria, BC-based artist Jeroen Witvliet’s solo exhibition at the Kelowna Art Gallery is taken from a painting he knows well, created in c. 1500 by Hieronymus Bosch that hangs in the Boijmans van Beuningen Museum in Witvliet’s “home town” of Rotterdam in the Netherlands. Wayfarer is also the title given by the artist to his recent series of large, dark paintings that will be in the exhibition, along with his Day/Night/Day Stadium paintings, and small works depicting human hands at an enlarged scale.

The exhibition has been considered as a complete experience, an installation, rather than a gathering of discrete works. Witvliet is interested in activating the entire gallery space, and in visitors’ interactions once they are in this space. He is fascinated by the dynamic nature of political and social situations, and with ambiguity and memory. The Wayfarer paintings are dense and puzzling works, fascinating in their seemingly random detail – mounds of discarded stuff along with branches, as though the entire contents of each composition has been readied for a bonfire.

Witvliet completed his MFA from the University of Victoria in painting in 2014. He is currently living and working on Vancouver Island, outside of Victoria.

Opening Reception
Friday, July 24, 7 to 9 pm
Artist’s talk at 7 pm.
This is a free event, open to members and guests by invitation.

Quick Talks
Thursday, September 17, 7 to 9 pm
Join artist Jeroen Witvliet for a discussion about the relationship between figuration and narrative. Check our website for details. 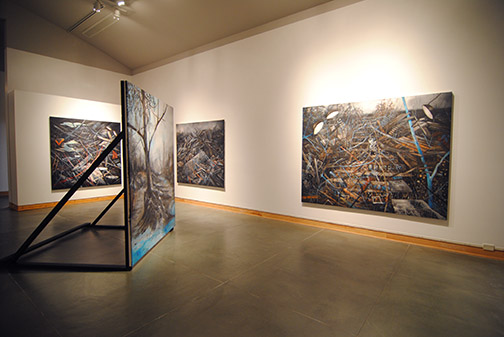 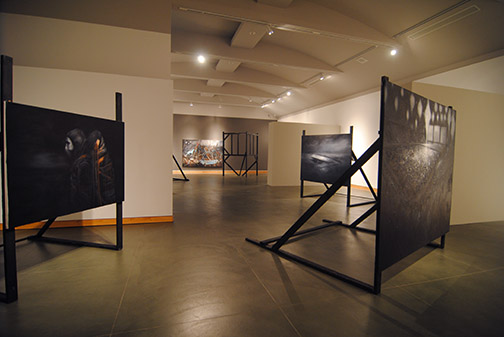