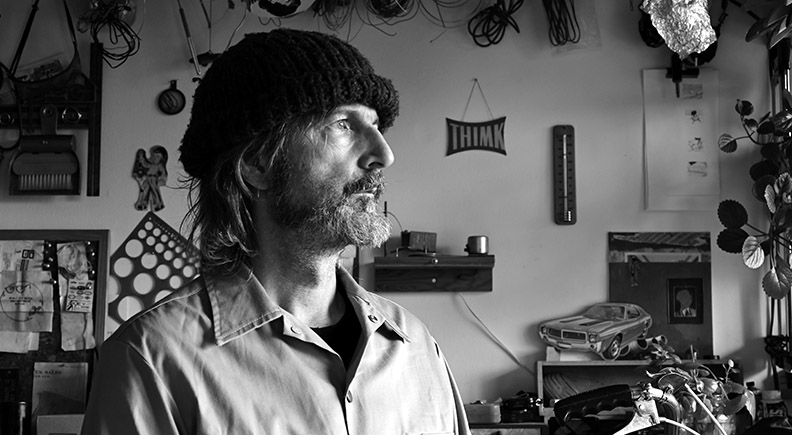 Plan to join exhibiting artist Jay Bundy Johnson, a Vancouver-based sculptor, musician and media artist, for a talk via Zoom entitled Dance with the Forlorn.

Two of Johnson’s kinetic sculptures (Beautiful Beacon and Providence), constructed using found objects, can be seen in the current exhibition A Year from Now: Works from the Permanent Collection.

Find out more about his unique artistic process and the genesis of his moving sculptures.

While crossing a street in October of 1982, I was struck by an automobile. I left my shoes at the point of impact; I was thrown high enough to pass over a row of cars. I landed (unconscious) in a parking lot some 40 feet away.

Jay Bundy Johnson is a Vancouver-based sculptor, musician, and media artist. He graduated from the Emily Carr Institute of Art + Design in 1993. Since then, Johnson ‘s work has been included in a range of exhibitions both public and private. As a respected performing/recording artist, he has played with Canadian Alt-Country trail blazers The Blue Shadows as well as underground folk heroes, Herald Nix and Mac Pontiac. His electronic music releases can be found under the title, Come On Photon. Johnson continues to teach at the Shadbolt Centre for the Arts (Burnaby, BC) and has encouraged hundreds of students to pursue their artistic practices.