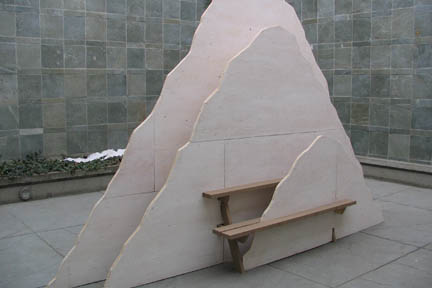 For the second in our on-going series of installations of contemporary art in our outdoor space, the Kelowna Art Gallery has commissioned Kamloops-based artist David Diviney to respond to the challenge. As his work has dealt with hometown and rural clichés (hunting, bricolage, creative taxidermy) for many years, it seems only natural that the form of seating he chose to deal with is the picnic table. This mundane structure, as we all know, has both seating and meal surface all in one handy and sturdy unit. It is hard to know when the picnic table was invented, but surely its popular spread occurred across North America after the Second World War, when gas was cheap, road networks were upgraded, and families everywhere began the summer road-trip vacation in the family car. Pull-over spots with familiar rows of picnic tables became a standard road-side convenience, often at lovely junctures of scenic views or look-offs.

The activity of the picnic itself is fairly new in human history, unless you count all the meals we ate on the ground out of doors as Neanderthals. The Fête Champêtre was a French eighteenth-century garden party, which perhaps led to the idea of the nineteenth-century picnic, as immortalized, for example, in Edouard Manet’s shocking Dejeuner sur l’herbe of 1863. In this work, as with Manet’s Olympia, the naked women were contemporary figures, not idealized versions of the nude Venus. This edge of debauchery seems not to have become an integral element in the North American family picnic. The word picnic derives from France as well, from piquenique. It seems that the pique portion of the word came from the idea of picking away at one’s food, and the “nique” syllable was coined simply because it rhymed with pique, but was without any meaning.

The most basic road-side sign’s symbol for the picnic table is readily and easily recognizable:

and in fact can act as an excellent Pavlovian prompt, giving us hunger pangs and a salivating mouth as we drive by, suddenly thinking of food.

From a certain point of view, the picnic table can be seen as an energized point or portal at the transition between indoor, “civilized” life, and the great natural environment, the out of doors. For when seated on the attached benches, eating our picnic on its flat surface, we have retained this modicum of an evolved life, with social niceties, such as table manners, in play. Remove the table, place us directly on the ground, hunched over our meal, and it all begins to crumble into a Deliverance-style zone of animal depravity, such as the one that lurks, snarling, at the edge of many of David Diviney’s works of art.

David Diviney has been on a trajectory of exploring his own rural roots in his art for some time. The artist grew up in the foothills of the Appalachian mountains, near Philadelphia, where he later went to university – a region rank with connotations of hillbillies to much of the wider world. Although his pieces seem light-hearted enough, he actually is grappling with darker aspects as well, and is examining cultural meanings, and theoretical notions: how we read images, the relationship between the urban and the rural in our culture. Diviney’s picnic table created for this installation, titled Drift, is less of a one-liner or direct joke than many of his other pieces exhibited in galleries. By contrast, this table is quieter, softer, and is very closely related to its mass-produced counterpart, as it sits innocently, like a duck decoy, in the Gallery’s courtyard. The artist has faked up some mounds of snow on the tabletop and benches, a nod to the season of winter, as the installation opens to the public in the month of January. When spring, and then summer arrive, any real snow that has accumulated will disappear, but the phony snowy structures will ensure that no one can actually sit on the table-as-work-of-art, keeping its dysfunctionality intact.

For our Dysfunctional Chairs series, The Kelowna Art Gallery acknowledges the support of the Vancouver Foundation. 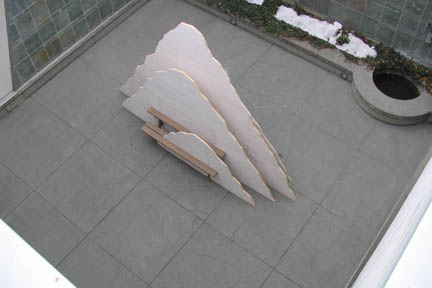