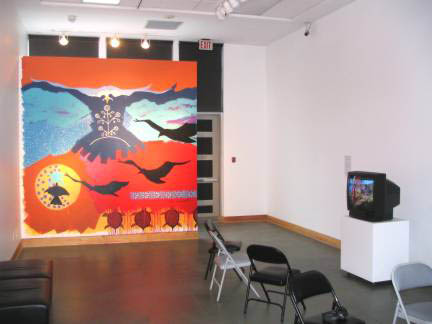 Digging Deep from Memory features seven films and videos that uniquely explore how Indigenous people express the concept of memory as it relates to traditional practice in their respective communities. Some works explore how events and memories of the past have impacted the lives of subsequent generations, while some explore how traditional ways and memories are being challenged in the twenty-first century. Other works highlight how traditional ways and memories continue to survive and contribute to contemporary life. Each television monitor in the gallery features film and video works ranging in length from twelve to seventy minutes. Most of the works have been produced in the past five years.

Accompanying this film and video exhibition is an original mural painting by Lee Claremont. Claremont, who is of Mohawk and Irish ancestry, is a member of the Grand River Iroquois Six Nations in Oshweken, Ontario. Lee has been based in the Okanagan since 1971. She received a BFA from the University of British Columbia in 1991 and has been an instructor at En’Owkin Centre since the mid 1990s. For over ten years she has exhibited her work in group and solo exhibitions and has won many awards and received much recognition for her work. Most recently, Lee’s painting Skywoman’s heart belongs to turtle was selected by a jury for the collection of the Department of Indian and Inuit Affairs.

The process of creating a large mural as a backdrop for the screening of aboriginal films does indeed take me on a spiritual journey of “Digging Deep from Memory.” My spiritual memories reach back to a time before time — as we know it — began. It is important as aboriginal peoples to bring our memories gently into the present and the future with respect and honor. My stories are told in colours, shapes and symbolism from the past informed by blood memories. — Lee Claremont

Digging Deep from Memory has been brought together by the Indigenous Arts Service Organization in partnership with the Okanagan Producers Collective known as the Ullus Collective. The Ullus Collective supports the training and development of Aboriginal video and visual artists and provides a forum for voicing stories, issues and concerns that are not addressed by current mainstream media.