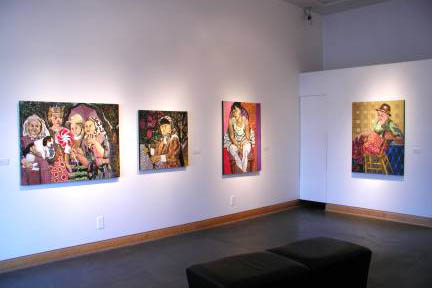 This exhibition features the paintings of Summerland-based artist Marie Cormack. Cormack paints bright, patterned and colorful figurative paintings of kids eating cherries, women displaying their fresh baked pies or showing off their prized tomato plants. These are ordinary people enjoying ordinary times and it is the artist’s intention to create “happy visual memories”.

In this series, Cormack explores the idea of paradise, a word that has often been used to describe the Okanagan Valley by both locals and visitors alike for one hundred years and more. Cormack’s paintings are animated by the artist’s use of conflicting color and pattern in both the paintings’ background and on the fabrics of her subjects’ clothing. It is through this use of pattern and color that Cormack attempts to reveal the personality and soul of her subject. One may also notice a sense of timelessness and the peculiar in Cormak’s portrayal of the inhabitants of her paradise. In some ways, the characters of her paintings could be inhabitants of Hanksville, a mythical place created and explored in the exhibition currently featured in the Treadgold Bullock gallery.

For over ten years Marie Cormack has exhibited her work in solo and group exhibitions in British Columbia and Alberta. She received a Diploma of Fine Arts in Painting from The Alberta College of Art in 1984 and went on to receive a B. Ed. from the University of British Columbia in 1987. In 1987-88 she participated in a Fibre Studio at The Banff Centre. After much traveling and moving, Cormack has settled down in Summerland, B.C., a town where her mother, grandmother and great grandfather grew up. Paradise is Marie Cormack’s first exhibition at the Kelowna Art Gallery. 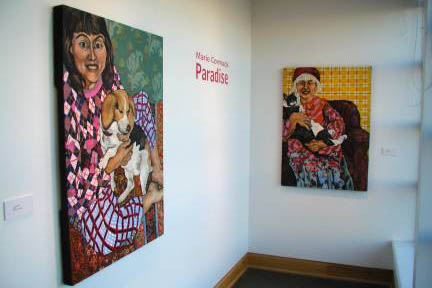 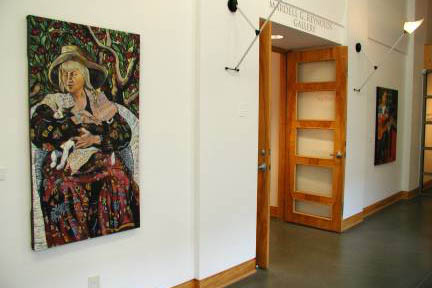