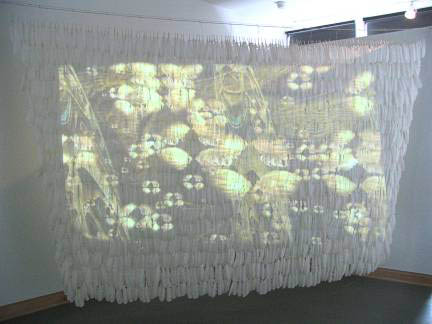 Lucinations is based on a legend from my community that comes from a time before the arrival of the Alaska Highway. According to this legend, a man was looking for a lost relation and went to ask the help of a medicine man. The medicine man put his spirit into a fox, which allowed him to travel more easily to look for the lost man. He found the man in the next community, but on his way home, he came down into Teslin from the top of a hill and saw a cloud hanging over the community. When he came back into his body he told everyone that life was going to change for the Teslin people forever – a change that came with the Highway.

As the creator of this work, I am a calalyst for re-telling this story. Using a magical modern, computer program called Maya, I have tried to remake the scene of what that vision might have been and what the medicine man might have dreamed while he slept. The feather screen was made to represent the cloud in this story. The piece is like nature, playing charades with the medicine man, showing him the drastic changes to come, but using local imagery from the era of when the vision was to have occurred. It is a beautiful dream but it is equally puzzling and disturbing.

Doug Smarch Jr. is an artist of Tlingit origin who is based in Teslin, Yukon. 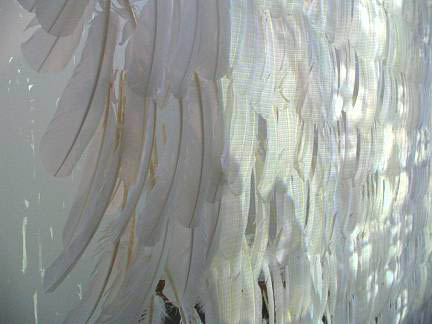