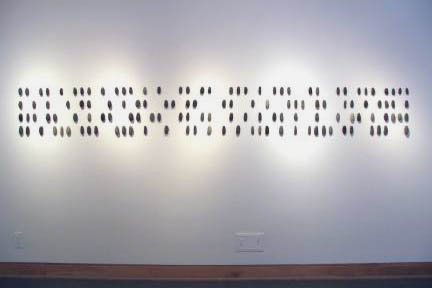 For over 10 years, Saltspring Island artist Diana Lynn Thompson has been exhibiting her work across Canada and internationally in solo and group exhibitions, and producing environmental installations, performances and community art projects. Thompson has been described as “a pilgrim of wonder in the natural world” and previous installations have been referred to as “profound conceptual and meditative undertakings.” Working with a variety of objects found in nature such as shells, stones and leaves, Thompson’s desire for connection and communication with nature, as well as a sense of respect for and honoring of its mysteries, is woven throughout her work.

Diana Lynn Thompson received a Bachelor of Fine Arts from the University of Victoria in 1983. Since then she has received numerous awards and grants and has been invited to participate in several residencies, the most recent having taken place in California in the spring of 2005.

2nd Nature is Diana Lynn Thompson’s premier exhibition at the Kelowna Art Gallery. The artist’s new installations in the Reynold’s Gallery and Rotary Courtyard are composed of over 1,000 stones which the artist has collected from a variety of locations, as well as over 2,000 handmade stones created over the past year.