Conversation with the Artist: Landon Mackenzie 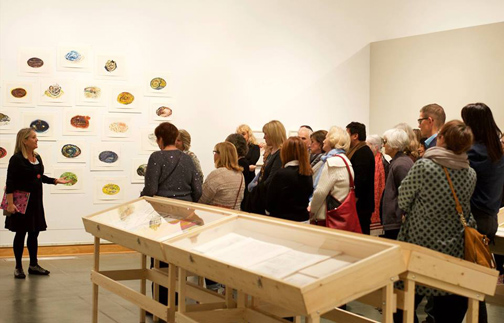 In conjunction with our current exhibition Landon Mackenzie: Parallel Journey: Works on Paper (1975-2015), please join artist Landon Mackenzie on Saturday, December 5, from 2 to 4 pm, for a public tour and panel discussion.

The topic of this panel is parallels between Landon Mackenzie’s works on paper with her painting and printmaking practices, as well as her career as a Canadian artist.

This event is FREE and open to the public.

Robin Laurence is an award-winning freelance writer, critic and curator based in Vancouver. She has a B.F.A. in studio arts and an M.A. in art history, and was educated at the University of Calgary, the University of Victoria, the Banff School of Fine Arts and the Instituto Allende in Mexico. She has written dozens of essays for local and regional galleries, and her articles on art have appeared in many magazines. Laurence was also visual arts critic for the Georgia Strait and the Vancouver Sun. Robin Laurence contributed an essay to the Kelowna Art Gallery’s book accompanying the Landon Mackenzie exhibition, published by Black Dog Publishing in the UK.

Ashok Mathur’s cultural, critical, creative, and academic practice is wide ranging and investigates new models of artistic research and interdisciplinary collaboration, particularly those that pursue a social justice agenda. As a writer, cultural organizer, and interdisciplinary artist, his work addresses the intersections of race, indigeneity, and creative and artistic research. His editorial work includes the anthology Cultivating Canada: reconciliation through the lens of cultural diversity (Aboriginal Healing Foundation, 2011), and numerous special volumes of arts and literary journals such as West Coast Line and Prairie Fire. His novels include A Little Distillery in Nowgong (Arsenal Pulp Press, 2009); The Short Happy Life of Harry Kumar (Arsenal, 2001); and Once Upon an Elephant (Arsenal, 1998). As an educator, Mathur works with critical race theory and radical/liberatory pedagogy to develop transformational and student-driven learning models.

Gary Pearson is an artist and Associate Professor in the Department of Creative Studies at UBC Okanagan Campus. He is also a freelance exhibition curator, art writer, and author. His exhibition reviews have been published in Canadian Art, Border Crossings, and Sculpture magazine, among other publications. He has received numerous grants and awards, including the Vancouver Institute of Visual Arts VIVA award in 1991, and the Okanagan Arts Award in Visual Arts, in 2010. Gary Pearson’s exhibition history includes solo and group exhibitions in Canada, the US, Australia, and Europe. He is represented by the Winsor Gallery, in Vancouver.

Liz Wylie has been curator of the Kelowna Art Gallery since 2007. Previously she held the position of University of Toronto Art Curator for eleven years. As well as her work as a curator, she has been writing reviews and articles on contemporary and historical Canadian art since 1977. At the Kelowna Art Gallery in 2010 she began a program of bi-annual exhibitions called the Okanagan Artists Series. In 2009 she launched the programming of a new forty-foot-long satellite gallery space at the Kelowna International Airport with six-month-long solo installations of work by Okanagan artists. Her recent publications include monographs on the Canadian artists Keith Langergraber, Keith Harder, John Hartman, Bill Rodgers, Christos Dikeakos, and Landon Mackenzie. Wylie holds an MFA in art history from Concordia University in Montreal. She is a past president of the Ontario Association of Art Galleries.