Regina Clay: Worlds in the Making 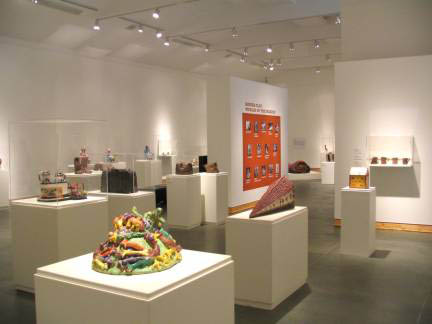 April 8 to June 11, 2006
Organized and circulated by the MacKenzie Art Gallery with the support of the Museums Assistance Program of the Department of Canadian Heritage.
Curated by Timothy Long

The exhibition narrative begins in 1964-65, with the arrival of sculptor Ricardo Gomez and ceramist Jack Sures at the art school of the University of Saskatchewan, Regina Campus. Under their influence, gifted students, such as Marilyn Levine, Victor Cicansky and Ann James, developed an interest in clay as a medium and helped establish Regina as a vital centre for ceramic sculpture and studio pottery.

Events in 1969 set the stage for Regina’s ceramists to be recognized on the national and international stage. The Hone-James Studio, founded a year earlier by Ann James and Beth Hone, held an important workshop featuring California funk artist James Melchert. A coinciding exhibition at the MacKenzie Art Gallery exposed the community directly to leading figures from the California clay scene. Significantly, one of the artists in that exhibition, David Gilhooly, was soon afterwards hired by the university to teach ceramics.

Although the Regina clay scene never developed into a movement with a formal manifesto or a defined membership, it was soon evident to outside observers that a creative eruption unlike anything else in Canada had occurred. Here was a group of artists who had rejected the serious modernist enterprise of uncovering abstract, universal truths in favour of a playful, if at times ironic, exploration of concrete, local realities. In many cases, artists had become associated with imagery that reflected a personal connection to people, places, and histories: Fafard’s Pense portraits, Cicansky’s outhouse temples, Gilhooly’s frog mythologies, Levine’s leather bags and boots, Yuristy’s stone boat drawings and animal playground sculptures, and James’s urethane and clay figurative assemblages. Their assertion of the importance of place aligned them with the emerging postmodern concern for locality and they struck a chord with the popular imagination at a moment when the back-to-the-land movement was at its zenith.

Throughout the 1970s, artists were shown in a flurry of exhibitions in Saskatchewan and across Canada. International recognition took place simultaneously through exhibitions in Japan and the United States, and, most significantly, in the selection of Gilhooly, Fafard, Cicansky, Yuristy, Levine, and James to exhibit in Canada Trajectoires ’73 at the Musée d’art moderne de la Ville de Paris in 1973.

In retrospect, the Regina Clay artists are notable for being among the first in Canada to win respect for ceramics as a sculptural medium. Despite the limitations of producing small scale works without a theoretical agenda and in a regional centre, their work succeeded in gaining international attention. Furthermore, their articulation of an aesthetic that is based in place and personal experience stands as one of the first attempts at a “cognitive mapping” of the emerging postmodern world. Located at the intersection between the local and the global, the worlds that they created continue to engage viewers with a freshness and intensity that derives from their intuitive understanding of the complex cultural issues that even now shape our globe.